It is deplorable that, while on the one hand the Chavista government -today headed by Maduro- together with its sounding boards from the outside and, on the other, the opponents from the right and the social-democracy, are in disgusting campaigns for selling to world opinion their equally biased visions and charged with interests of power, many anarchist voices outside of Venezuela have maintained a mutism that is in some way tacit acceptance of what one or other of the hungry contenders for state power want to impose as « truth. » We know that sympathetic voices do not have the access to most media, as it sits ready at the order of statists, and that comrades face complex realities where there are issues and problems that, due to their proximity, demand their immediate concerns, but we understand that this difficulty should not be an obstacle so that, in some modest way, attention, interest and solidarity are expressed both for what happens in Venezuela and for what the anarchism in this region divulges.

In a rundown of what local anarchism says today, the present juncture shows the fascist nature of the Chávez regime -and its sequence with Maduro-, reactionary militarist governments that we have denounced forever in El Libertario. It has been a regime linked to crime, drug trafficking, looting, corruption, imprisonment of opponents, torture, disappearances, apart from the disastrous economic, social, cultural and ethical management. Chávez managed to impact with his messianic and charismatic leadership, financed by the rise of the price of oil, however after his death and with the end of the bonanza, the so-called Bolivarian process deflated, being supported by weak bases. This « revolution » followed the historical rentist tradition initiated at the beginning of the 20th century with the dictator Juan Vicente Gómez, continued by the militarist Marcos Pérez Jiménez, and did not cease in the later representative democratic scheme.

There are those at the international level (Noam Chomsky, the best example), that rectified their initial support for Venezuelan authoritarianism and today they denounce it in a clear way. However, we note with great concern the silence of many anarchists of this and other continents about the events in Venezuela. It says an adage: « the one who is silent grants », which is perfectly fulfilled when people are starved and criminally repressed and who should protest for it say little or nothing. We call on those who embrace the libertarian banners to pronounce, if they have not, on our tragedy. For indifference, there is no justification if one has an anti-hierarchic (actual word used here is “Ácrata”.^N.delT.) vision of the world. The opposite is to cover up the government farce, forgetting what the anarchists of all time have said about the degradation of authoritarian socialism in power. Perhaps in the past the « progressive » mirage of chavismo might have deceived even some libertarian people, but being consistent with our ideal it is impossible today to continue to hold that belief. 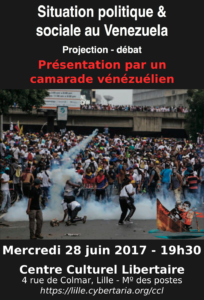 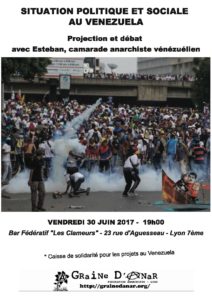